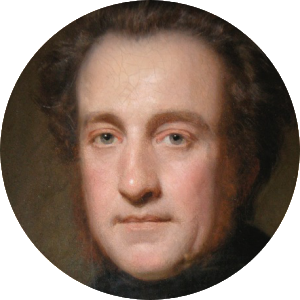 Although born in Paisley (where a plaque still marks his birthplace) at the age of 18 David Stow moved to Glasgow to work as a clerk in his brother-in-law’s firm. He joined the Tron Church, where his minister, Thomas Chalmers, instilled in him a passion for social responsibility. When Chalmers moved to the newly-created St John’s Parish to initiate the renowned social and economic experiment for the alleviation of poverty among the urban poor, Stow became an enthusiastic activist. At Chalmers’ request, he established a Sabbath School class in the Gallowgate and there, amongst the rags and squalor, he honed the teaching skills, philosophy, and attitudes to children which were to make him one of the most influential educators of his generation.

Stow soon realised that a few hours of schooling on a Sunday were insufficient to halt the appalling ignorance and poverty which were the hallmarks of the early years of the industrial revolution. He formed the Glasgow Infant School Society which, in 1828, opened a day-school in the Drygate with a radical ‘fun’ approach to learning.

Before long,  Stow was the driving force behind the Glasgow Education Society and when the need for trained teachers became urgent, Stow undertook to be not only the secretary, but the fundraiser, site-selector, building supervisor, liaison-officer and staff appointee – in effect organising whatever was necessary. On October 31st 1837 the first teacher-training college of its kind in Great Britain was ceremoniously opened in the New City Road. It was called ‘The Normal College’ after the French word ‘norma’ meaning a rule or system. Teachers trained in Stow’s ‘system’ were sent out to schools throughout the United Kingdom and the Colonies taking his approach across the world. Eventually, the Glasgow Normal College, and its sister, The Free Church Training College, merged to become Jordanhill College of Education – now the School of Education in Strathclyde University.

Although remaining a city merchant/manufacturer all his life, with a large cotton factory at Port Eglington, Stow devoted all his spare time to the philosophy and practice of teaching and teacher-education. The eleven editions of ‘The Training System’ illustrate a growing confidence in his educational ideas, developed from his own experience and in conjunction with David Caughie, one of Scotland’s greatest teachers. Their curriculum, methods, resources, and the value given to children are astonishingly ahead of their time. In particular, Stow is remembered for his use of peer pressure in secular and particularly moral teaching; and in his insistence that concept development should be rooted in the children’s experience and allied to a precise use of descriptive language. His contribution to the city of Glasgow and, indeed throughout Scotland, has been shamefully neglected in recent times and it has been left to others far afield to honour his contribution to education.

A SORT OF AMATEUR SCHOOLMASTER